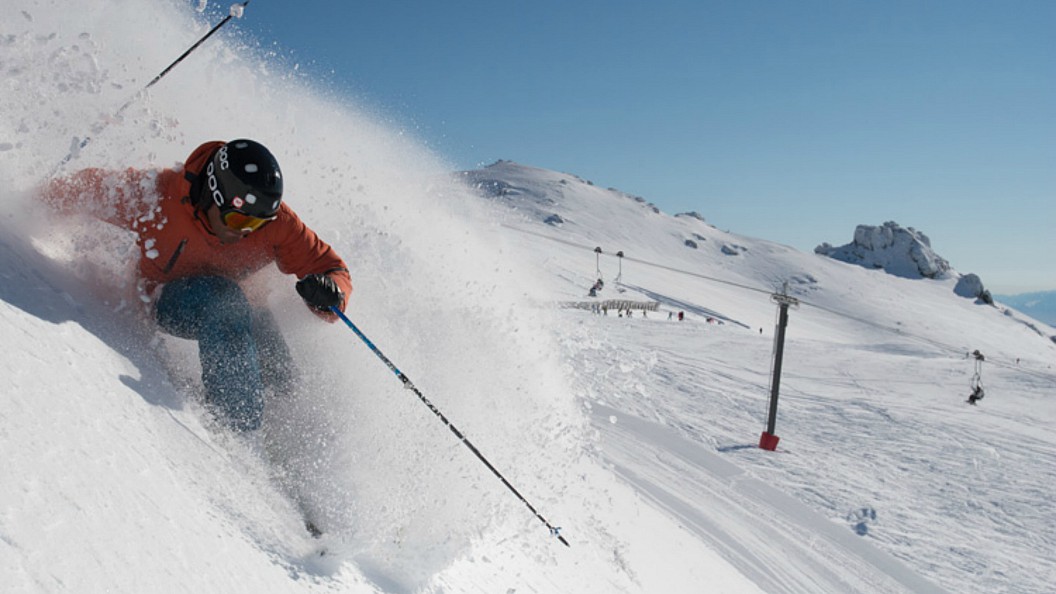 Snow is in the Air – Cardrona Alpine Resort
By Justine Tyerman

“Water skiing or snow skiing?” Those were the choices of activities we put to our Northern Hemisphere and Australian guests when they visited Wanaka for a mid-summer wedding. 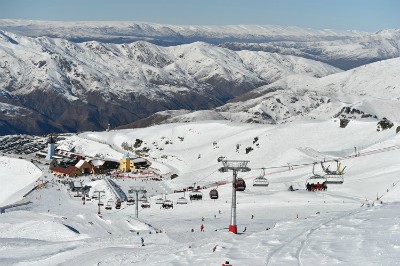 Some of them were already seriously disorientated by weather-related disruptions to travel which left them stranded in all manner of places they had never heard of before, like Invercargill in the deep south of New Zealand. So the concept of snow at Central Otago’s hottest time of the year had them really scratching their heads about which hemisphere and season they had landed in.

There were many sceptics among them… until I produced my cell phone with photos from my friend Jen at the Cardrona Alpine Resort surrounded by 15cm of snow with the blizzard still raging. Jen’s workmates were cavorting in the snow in their shorts and T-shirts.

“So, as I said, skiing or snowboarding is one option, or our good mate John can take you water skiing on Lake Wanaka behind his jetboat. We’ve actually done both in one day here.”

The novelty of skiing in mid-summer won the vote and also allowed the large group of Aussies to inspect the excellent facilities at Cardrona for future winter ski holidays across the ‘Ditch’ (aka the Tasman Sea). 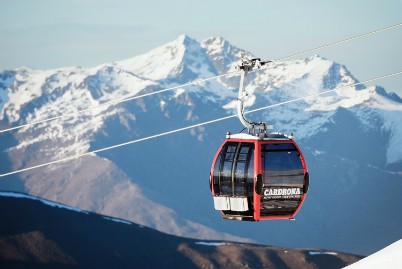 The McDougall’s Express Chondola at Cardrona Alpine Resort, a new $10m lift combining eight-person gondola cabins and six-seater chairs, was operating, but instead of whisking tourists up to the summit to take photos of the magnificent Southern Alps and sunbathe in bean bags at the Vista Bar, they were having snowball fights and making snow angels. Our guests joined in and, to be honest, they did not do any skiing or snowboarding once they discovered the Mumm Champagne at the Vista.

“Celebrating the wedding,” they said. That was their excuse, anyway.

The unseasonable snowfall had interrupted Cardrona’s summer programme of mountain carting, biking and hiking, but no one seemed to mind. There was a high degree of excitement at the apparition of the white stuff, which reminded me of the mass lunacy fresh powder creates in an alpine community like Wanaka, especially in mid-winter.

People gather in groups to sniff the air and study the cloud formations, making wise prognostications about how much will fall, from which direction, what field will get the most, whether it will suit skis or snowboards best, and how early to hit the slopes.

Now that our Indian summer is drawing to a close in New Zealand, I find myself impatient to leapfrog autumn and get stuck straight into winter. I look longingly at my ski gear and can’t wait to pile on layers of merino wool and head out for a day in the mountains. It’s early autumn and it’s already snowing heavily at Cardrona, Jen tells me –30cm already. She sent me photos of outside tables and rooftops piled high with fluffy white powder. I can smell it in the air. Only two months until the season opens.

In the meantime, I have to make do with memories of the last day we skied at Cardrona at the end of winter, 2017. It was pure magic – the sun was beaming down from a cloudless sky on slopes sparkling with late-season powder snow that squeaked underfoot. There was no wind, not even a zephyr.

We skied the entire mountain from boundary to boundary and everything in between. It had been years since we’d skied the Secret Shute on the extreme right of the mountain and it was brilliant – untouched powder and the whole piste to ourselves.

At lunchtime we chilled-out and drank a glass of cider in the sunshine at Captains Café. I chuckled to see the staff wearing T-shirts with the words ‘Cardrona – promoting sick days since 1980’. There would have been a high degree of absenteeism amongst Wanaka workers that heavenly day.

After nearly four decades of skiing at Cardrona, I finally found out that our favourite café was named after an old rodeo horse who was put out to pasture on the mountain during the 1970s. Captain was a nightmare to wrangle, so much so that some of the men wanted to shoot him. But Cardrona ski field founder and pioneer John Lee identified with Captain’s tenacious spirit that matched his own, naming a ski field basin, lift, and café after the horse. The entire history of the field, which commenced operations in 1980, is recorded on the wall of Captain’s Café.

In the afternoon, between runs, we were entertained by the world’s top skiers and snowboarders practising heart-stopping, death-defying aerials in the terrain park directly below the Whitestar Express chairlift. It was the lead-up to the Winter Games and some big names were in action.

At the end of the day, we rode the ‘Chondy’ to the top of the mountain and sat in the bean bags at the Vista Bar watching the sun go down, a glass of bubbly in hand. As the sun slid from the cloudless sky, we reminisced about the many years we had skied at Cardrona and the changes we had seen since the field opened in 1980. We proposed a toast to John Lee, the Mt Pisa farmer who had a bold vision to ‘farm snow’ many years ago.

Our last run of the season was Queenstown Return, a scenic glide along the cat-track on the Cardrona boundary, with breath-taking panoramas of the Southern Alps and the entire Wakatipu Basin. In the distance, we could even see Arrowtown where I spent all my holidays as a child.

Why Ski at Cardrona? 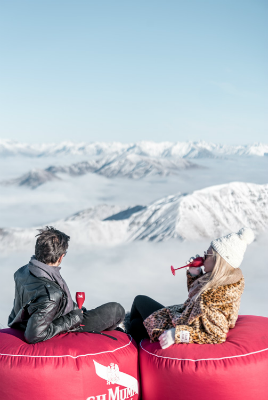 Apres ski drinks… with a view

The Aussies were delighted we took them up to ‘play in the snow’ and they’re now busy planning skiing trips across the ‘Ditch’, which was actually part of my cunning plan.

They asked us why we always ski at Cardrona when there are three other ski resorts in the area.

I replied: “We know the road will be cleared and gritted, the whole mountain will be groomed to perfection with acres of squeaky corduroy, there will be no sheets of ice, the sun will (usually) be shining from a cloudless day, the chorizo on the pizza at Captains Cafe will be crispy, the cider and bubbly will be chilled and refreshing, the lifties will be friendly and funny, offering sunblock to everyone… and you will have FUN.”

And Cardrona Alpine Resort’s latest enticement? For those short of time and wanting the ultimate tailor-made experience, the Cardrona Guest Services team can arrange:

We also introduced our friends from across the Tasman to the team at Outside Sports in Wanaka who will set them up with excellent ski and snowboard rental equipment. With shops in Wanaka, Queenstown, Queenstown Airport, and Te Anau, Outside Sports has the expertise and gear for all skiing, snowboarding, hiking, biking, climbing, camping, fishing, running, fitness, travel, and leisure activities. We’ve been going there for decades.

Roll on winter… until then, be sure to check out the latest video on Cardrona on Luxury.TV.

Cardrona Alpine Resort near Wanaka is New Zealand’s most popular ski area, attracting all kinds of snow enthusiasts – from beginners and families, to Olympic and X Games athletes. The season opens on June 16 and closes on October 14.  (www.cardrona.com)

Touch of Spice – While in Wanaka, LuxuryNewZealand.com recommends staying at a luxurious Touch of Spice property such as the lake-edge Cedar Hideaway, an award-winning 2010 Home of the Year architectural masterpiece. (https://www.touchofspice.co.nz/luxury-accommodation/wanaka-accommodation/cedar-hideaway)

Contributing Editor Justine Tyerman is an award-winning travel writer, journalist and sub-editor from Gisborne, New Zealand, with 20 years’ experience in newspaper and freelance work. Check out her work at www.just-write.co.nz and Tyerman’s Travels Facebook. 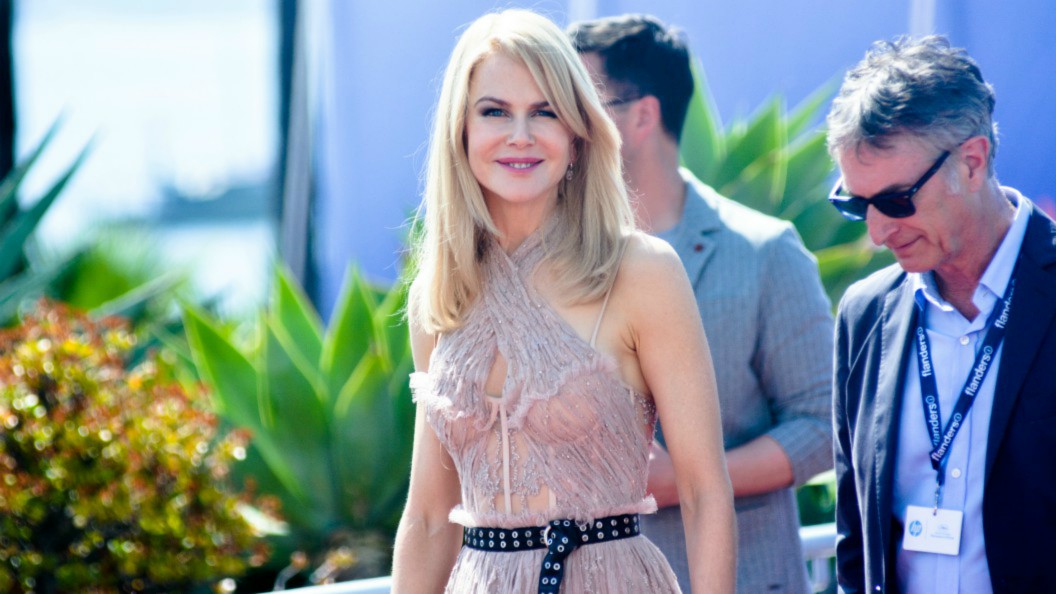